Brazilian Jiu Jitsu is so much more than a martial art. It’s also based on core values of loyalty, justice, morality, serenity, humility, honor, self-confidence and respect.

It teaches important life lessons, like character and resilience, that can be used in real-life situations.

The incredible story of 6 year old Bridger Walker, from Wyoming, USA, who selflessly stepped in and saved his younger sister from a dog attack, exemplifies just that.

Bridger’s aunt, Nicole, recently took to social media to share the heroic story of the dog attack, which resulted in him needing 90 facial stitches.

“ On July 9th, my six year old nephew Bridger saved his little sister’s life by standing between her and a charging dog. After getting bit several times on the face and head, he grabbed his sister’s hand and ran with her to keep her safe. He later said, “If someone had to die, I thought it should be me.”

Bridger was prepared to give up his life, without a second thought, for his sister.

Where did his courage and selflessness come from?

The family said he was protective of his sister from the moment she was born. He always had a “ warrior heart ”.  (IG @robertwalker307)

Bridger also trains in Brazilian Jiu-Jitsu with his older brother and dad. In a statement written by the family , they refer to the lessons and mindset he’s learned since taking up the art two years ago.

“Bridger has always been one of the youngest and smallest in the class. The size difference has given him the opportunity to confront larger and more experienced opponents regularly. Even though he is often short on attention, Bridger has grown in maturity and ability…

When his brother recently decided to compete in a local grappling tournament, Bridger demanded we register him to compete in the youngest age bracket – much to our consternation. After coming in fourth place, and his brother in first, he was utterly crushed that he did not get a medal. As his parents, we did our best to assure him that it was for fun, that we knew he did his best, and that he showed great heart and courage. Driving home, as we discussed, we could tell his disappointment was the start of a greater determination.”

That “ greater determination” and the lessons he learned at the dojo helped him to act selflessly, with confidence and humility. It taught him real courage in knowing what to do and he acted like a true hero by putting his sister first, regardless of the outcome. This goes to show that martial arts benefits kids far beyond the mats and in many real-world scenarios.>

There are many forms of martial arts and whether you choose BJJ or Muay Thai or another form, they all focus on building character.

At OAMA we strive to teach the importance of traditional values, self-confidence, passion, and facing your fears. We want our students to leave feeling that they can conquer anything. And be proud of doing it!

If you’re looking for an activity that helps develop core values, physical and mental strength, and valuable social skills, while having fun, come experience what our classes have to offer by joining a class in-person or online. It’s something that the whole family can do together! 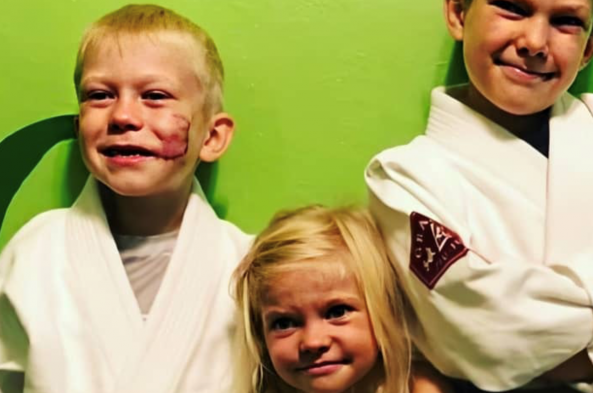